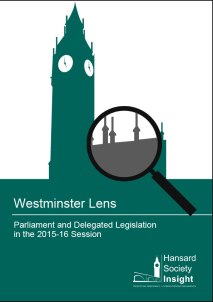 Promises to ‘take back control’ and ‘reclaim parliamentary sovereignty’ have dominated the Brexit debate. But as the Great Repeal Bill looms, new data published today shows why scrutiny procedures for delegated legislation are not fit for purpose and why, if they are not reformed, the Brexit process will enhance the power of the government rather than Parliament. Launching our Westminster Lens data project, this report examines the delegated legislation process in the 2015-16 session – including new data on controversial Henry VIII powers – and challenges a number of assertions made about the process by Ministers and Members of both Houses alike.